I’m pleased to announce that we’ll be having a baby in March 2011. And here’s the proof… 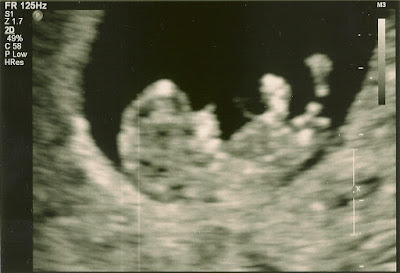 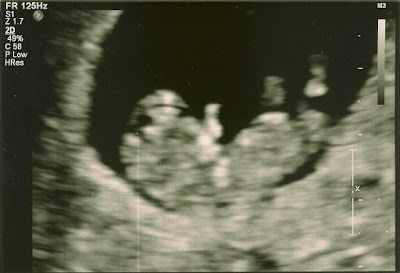 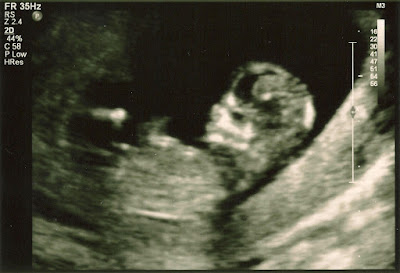 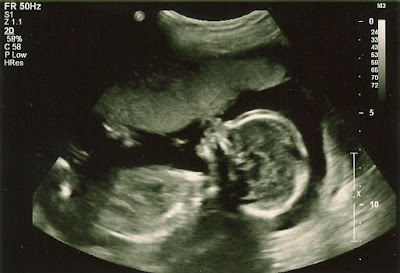 Baby Ruscoe posted by Unknown at 10:56 3 comments Add your comments

Back to the Future: Back in the Cinema

I first watched Back to the Future when it aired on TV, complete with terrible dubbing over the “bad” language, which I recorded to VHS and watched practically daily. I had the pleasure of seeing Part II and Part III at the cinema. My mother then bought me a VHS rental copy of Part II from a friend that owned a video rental store – ssshh! – and I watched that until the tape was nearly worn out. When the VHS trilogy box set was eventually released, I asked for it one Christmas and watched that regularly, having a strict rule that I would always watch each film all the way through so that the tape wouldn’t unevenly worn in places.

When the DVD box set came out, I got that for another Christmas and was disappointed to see that it suffered from being framed incorrectly (known as the BTTF DVD Framing Fiasco) and got two replacements discs delivered from Universal. When the “Ultimate Edition” DVD box set was released a few years later, I couldn’t resist getting that one as it included even more bonus material and previously unseen footage.

I also made my own plywood Hoverboards and other replica props from the trilogy when I was younger, filmed some scenes out of the film with friends when I was in my school’s Film Club, bought the soundtrack and original score on cassette and CD, own several model DeLoreans, and more recently dressed up as Doc Brown for a friend’s 80s party.

I guess you could say that I’m a fan; a fan that had never seen the original movie at the cinema. So imagine how excited I was to hear that Universal was re-releasing Back to the Future in UK cinemas to show the original movie in all its digital glory following the remastering they’d done for the 25th Anniversary Blu-ray release.

Last night, I joined a queue of other fans waiting to watch the movie on the big screen, most of them probably for the first time like myself. You could sense the excitement in the air and hear people arguing about which film in the trilogy was the best or worst while others quoted their favourite lines. When we eventually got seated and the film started, there was a spontaneous round of applause and cheering followed by complete silence as everyone watched the opening scene. (Kudos goes to the guy taking a photo of the opening logo with the iPhone and not getting thrown out!)

After watching the film on TV, VHS and DVD dozens and dozens of times over the years, was it any better on the big screen after its digital remastering? Of course it was!

I’m not sure whether it was due to the remastering or simply the size of the screen, but the level of detail was amazing, for better or worse. A great example being the DeLorean, which actually looked like it had been built by a crazy scientist, with all the welding, rivets, screws and imperfections clearly visible. On the other hand, you could really see the effort the make-up department had gone to in order to age the actors playing Doc Brown, Biff Tannen, Lorraine and George McFly by thirty years for the 1985 scenes, but it unfortunately looked a bit too much like latex at times.

But what I enjoyed most about watching the movie at the cinema was the audience reactions to all the classic lines, which made me hear some of them with a new perspective, like when the Doc says, “There’s a rhythmic ceremonial ritual coming up.” I hadn’t really appreciated how funny that actually sounded before. I also only really realised for the first time quite how sinister Biff is being when he’s trying to force himself on Lorraine in the car outside the Enchantment Under the Sea Dance before George comes to save her. I generally just felt more emotionally attached to the characters and totally immersed in the action. When the credits started to roll and the audience was clapping and cheering again, I honestly felt a bit overwhelmed. And I can now finally say that I’ve enjoyed watching Back to the Future at the cinema.

As a final thought, I hope that this re-release proves to the film production companies that they don’t need to remake old films in order to bring them to a new audience and rake in the money from the theatrical release. If it’s a truly great film, all they need to do is re-release the original. There’s even no need for any extra effects to be added either. It should also reinforce the theory that film-lovers will still pay (what seem to be extortionate amounts these days) to visit the cinema and watch a great film despite having already watched it many times in their homes, sometimes even from poor quality copies. In fact, it might even persuade people that they need to see the film on the big screen to fully appreciate and enjoy it. Things have changed a lot over the last twenty-five years with the widespread adoption of the Internet and the movie industry needs to change too.

Back to the Future: Back in the Cinema posted by Unknown at 10:03 1 comments Add your comments